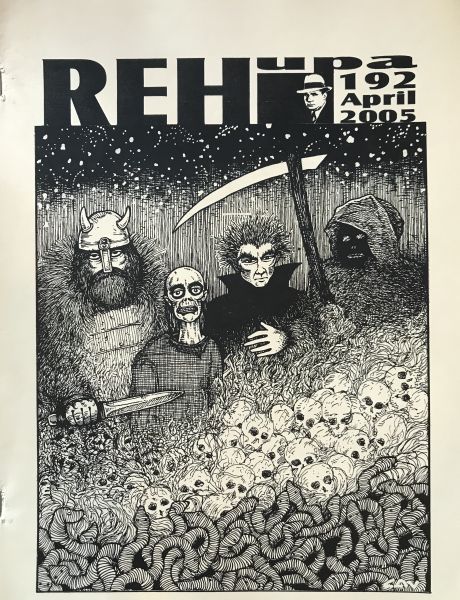 If you’re reading this blog, you may be aware of the Robert E. Howard United Press Association or REHupa (pronounced “ray-hoop-uh”), an amateur press association that is focused on Howard and his writing. If you’re not, REHupa is a bunch of people who occasionally send in 35 or so copies of a fanzine that they have produced to an “editor.” The editor combines all the ‘zines into mailings and sends them back out to the members so that everyone gets a copy of everyone else’s work. There are only ever 30 members. Most of the people associated with Howard fandom have appeared in REHupa over the years—from biographers to publishers, artists and scholars, and even people like me.

A single REHupa mailing will cover a wide range of topics; the quality of individual contributions to a mailing swings dramatically from the outstanding to the abysmal. Some people use their ‘zine as a proving ground for essays, some submit (usually) horrid fan-fiction. There can be articles about comic books, board games, video games, biography, Weird Tales, trip reports, pulp magazines, Texas, H. P. Lovecraft, genealogy, literary criticism, bibliography, lists, and more—all in a single mailing, and all subject to varying degrees of proofreading. The only requirement is that the subject matter should be at the very least tangentially related to Robert E. Howard. Some people really stretch that point.

Anyway, I’ve been a member since 2004 and have now “published” 78 issues of my ‘zine, Onion Tops (more if you count a Special Edition I submitted back in 2005). Over the years, especially at Howard Days in June, I’ve heard a lot of fans complain about not being able to read the mailings. As I mentioned above, part of the reason they aren’t available is that these aren’t, generally, finished products; they are first drafts looking for peer review or the inklings of ideas that need a lot of work. And sometimes a ‘zine is just a person ranting about the latest Conan movie—who wants to have that out in the world? True, there are the occasional gems—like an obscure Howard mention, or a draft chapter for a Howard biography—but overall, if you’re not on the mailing list, you’re not missing much.

Another thing that some fans bemoan is the fact that they could never produce a ‘zine good enough for inclusion in THE REHupa. Well, I finally got tired of hearing that one. If you click the REHupa link on the sidebar, or here, you’ll be taken to a list of my contributions to the a.p.a. I’ve uploaded a few of my early ‘zines so that everyone will see that it doesn’t take much to get in. By scrolling to the bottom, you can look at my more recent contributions. Nothing stellar. Most of the “good” stuff has appeared elsewhere.