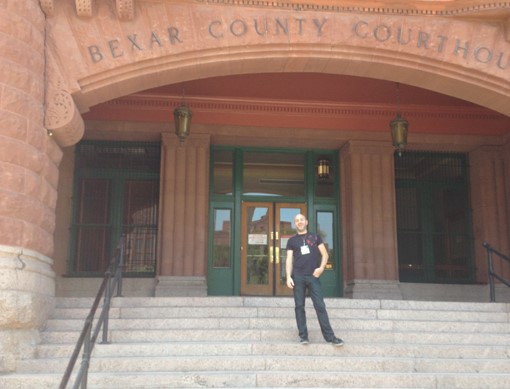 One of the reasons I was so gung-ho about going to WorldCon this year was because it was in San Antonio. Readers of this blog may have noticed that I’m a tad obsessed with visiting county courthouses in Texas, and, up to this point, I hadn’t been to the Bexar County facility. There are reasons for this: I have generally found that the larger the courthouse, the less helpful they are; also, my usual traveling companion (my dad) disdains to drive in populated areas. But, since the Howards had lived briefly in San Antonio and visited on occasion, a stop at the courthouse was required. So, since I’d be traveling solo this time, I figured I’d brave the traffic and see what treasures I could uncover.

I’d originally planned on swinging by the courthouse in the morning, before my first WorldCon panel on Friday; however, I lost half an hour due to construction and the abysmal parking situation downtown, so I abandoned that plan and went to the convention center. During a lull between panels, I decided to take a walk. I asked my fellow Howard-heads if anyone else was interested; only equally-obsessed Patrice Louinet took the bait [that’s him in the photo above].

We walked the five or six blocks to the courthouse, emptied our pockets and walked through the metal detector, only to be told by the guard that everything we were looking for was at the annex across the street. We refilled our pockets and hit the county clerk’s office in the other building.

One good thing about the larger counties is that their land records have been scanned and indexed. A quick name search on the computer will generate a list of all the pertinent documents. I searched for Howards and McClungs while Patrice looked for Ervins. None of the Howards that popped up appeared to be connected to our Howards, but there was one item on W. O. McClung, Bob Howard’s uncle (Dr. Howard’s brother-in-law). The document raises more questions than it answers. Some kind of judgment was rendered against McClung and a few others, but the type of judgment is not mentioned and the clerk couldn’t find any other documents to help us make sense of this one. And it’s always possible that this McClung isn’t our McClung, though they were definitely in the area around that time. Maybe someone will look into it later.

After finishing up with the county clerk, we went down the hall to the district clerk, which is where medical/physicians registries are typically housed. There were at least two reasons for looking into this. In a November 7, 1936 letter to a sister-in-law, Dr. Howard says the following: “I well remember when Robert was only four years old we spent the winter in San Antonio and the spring months in Atascosa County, some thirty miles south of San Antonio.” In Dark Valley Destiny, L. Sprague de Camp reports this:

[O]n January 8, 1910, Dr. Howard presented his credentials at the county seat of Bexar County, giving his home address as Poteet, a few miles from the border. Years later Howard reported that he lived for a time on a ranch in Atascosa County, Texas, near San Antonio. These bare facts are the only records we have of the family’s South Texas adventures.

I already have a copy of the registration mentioned above, but it’s a crappy scan of a photocopy, and I always like to have color photographs of the real thing. Plus, there’s a problem with de Camp’s statement: The January 8, 1910 document was filed by the district clerk of Atascosa County, not Bexar County. Of course, when I went to the county seat of Atascosa County last winter, they couldn’t find a Medical Registry, so maybe, I figured, the book was housed in the larger county’s archives. Anyway, I wanted to have a look at the Medical Register for Bexar County.

With one exception, Clay County, the district clerks’ offices never know that they should have such a volume; Bexar County was no exception. Luckily, the director of archives happened to be in the building and he called over to his office. Someone there located the volume I wanted; unfortunately, the archives collection was clear across town. As Patrice and I walked back to the convention center, in the blazing, humid heat, I tried to decide if I really needed a color photograph of a document I already had a copy of. Obsession won. 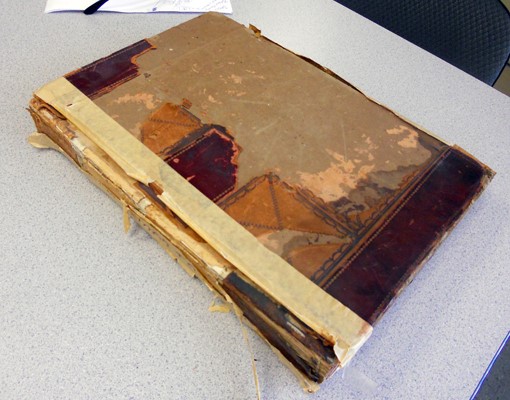 Leaving a trail of sweat behind, we arrived at the Bexar County Archives and Training Center—they were expecting us. We drank gallons of water and wiped the sweat off of our bald heads with paper towels while waiting for the book to arrive. The book (above) has seen better days, but its index is still intact, so I turned to the section marked “H,” found Dr. Howard, and went to page 260. I didn’t remember the short list of Dr. Howard’s other registrations at the bottom of the page, but I was so convinced that I already had a copy of this document that I didn’t pay much attention to that. After taking a few photos, we settled back and waited for a taxi—if we’d tried to hike back in the sweltering heat, there’d be nothing left of us but a sweaty smear on the sidewalk.

In the cab, I inspected the digital images a little more thoroughly in my camera’s display window and started to think that maybe this wasn’t the same document that I already had, but we arrived back at the convention center and I put that thought on the back-burner and enjoyed the rest of WorldCon. 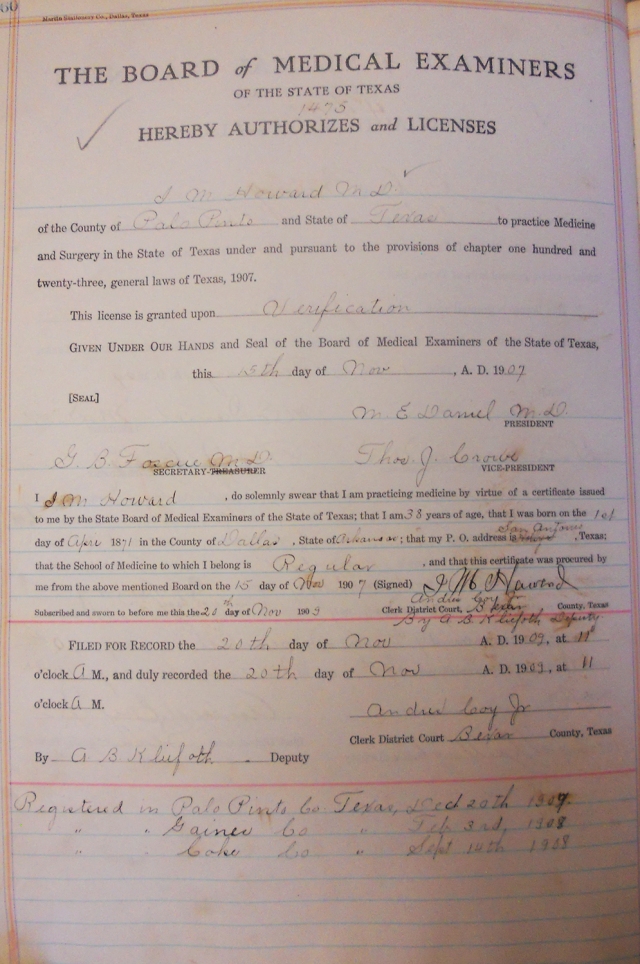 Once I got home, I pulled the image up on my computer and had a better look. Different document. The registration de Camp mentioned was indeed filed on January 8, 1910—but in Atascosa County, not Bexar—and Dr. Howard’s address is listed as Poteet. This document was filed on November 20, 1909, in Bexar County, and Dr. Howard’s address (after crossing out what would have been Holly Springs, in Arkansas) is listed as San Antonio! Plus, at the end of the page is a list of other counties in which Dr. Howard had registered: Palo Pinto (Oran), Gaines (Seminole), and Coke (Bronte). Some of the information here flies in the face of what has been presented in the past. For example, according to notes by de Camp’s partner in DVD, Jane Griffith, Dr. Howard registered at Seminole on the day that the Bexar Co. document has him registering in Coke County—I’ll take a document over someone’s notes any day of the week.

Using this document, and a couple of newspaper articles I found just before going to San Antonio, I’ve put together a more precise timeline for December 1907 to January 1910. To wit:

On December 20, 1907, I. M. Howard of Oran, Palo Pinto County, had his medical certificate recorded with the county. Shortly after doing that, he packed up his wife and almost two-year-old son and headed west. The January 3, 1908 edition of The Enterprise (edited by Hester Howard’s brother, William Vinson Ervin, in Big Spring, Texas), has this: 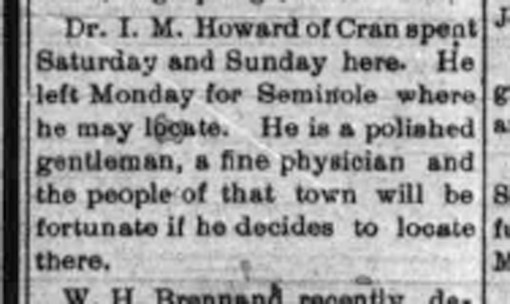 “Monday” would have been Dec. 30, 1907, and don’t go scrambling for a map to look up “Cran” like I did; there is a Crane, Texas, very close to Big Spring, but as soon as I showed this to Patrice he said it is “of course Oran.” Duh.

The January 24 Enterprise has an update:

The new San Antonio registration has Dr. Howard registering in Gaines Co. on February 3, and we know from a death record that he was there until at least July 24. The same document has him registering over in Coke County on September 14, 1908, and he starts recording births in Bronte at least as early as January 19, 1909. The last birth record I’ve found there with Dr. Howard attending was recorded on August 24, 1909.

I’ve theorized that after leaving Bronte the Howards visited the McClungs in Crystal City and went down the Nueces in the fall of 1909 (look here). Whether they did that then or not, we now know that they were in San Antonio sometime before November 20, 1909. Less than two months later, Dr. Howard registered in Atascosa County, with an address in Poteet. From there, things get pretty sketchy again.

I never did get a picture of the Atascosa County registration.

One thought on ““We Spent the Winter in San Antonio.””