Now the University of Mary Hardin-Baylor, the old Baylor College for Women in Belton, Texas, ran an annual high school poetry contest starting in 1922. When they opened the contest up to boys in 1923, Robert E. Howard submitted “The Sea.” I wrote about this contest a few years ago in “The Poetry Contest.” For that article, I had to rely on community newspapers for the bulk of the information regarding the contest in which Howard won an Honorable Mention. Now I’ve found a better source.

In his June 22, 1923, letter to Clyde Smith, Howard doesn’t mention the Honorable Mention, but he does describe the fate of his poem:

I got a letter from the assistant editor of The Campus, S.M.U. He said he saw my poem “The Sea” in The Baylor United Statement [sic.] and he asked me to contribute to The Campus. I sent him a poem.

Moved to action by this reference, several years ago I spent an afternoon in front of the microfiche reader at Southern Methodist University in Dallas looking through old issues of their newspaper, The Campus. I didn’t find any Howard poems. I have also been on the lookout for issues of The Baylorian and The United Statements, especially the issue containing “The Sea,” which, as far as I know, no one has ever seen. If Howard hadn’t mentioned it to Smith, we wouldn’t know about that appearance. Not long after visiting SMU, I contacted the library at Mary Hardin-Baylor and learned that they did have some issues of those papers, but not the ones I was looking for. So, I put those papers on the back burner and moved on to the next thing.

Not long ago I reopened the investigation and discovered several digital copies of the college’s publications from the right time period, including the issue of The Baylorian that contains the rules for the 1923 poetry contest. At the bottom of that page, partially obscured by their “Courtesy of . . .” watermark, is the following publication information:

Announcement of the awards, together with the publication of the poem winning first place, will be made through the press of the state; and all poems winning prizes or honorable mention will be published in the May issue of the Baylorian.

The May 1923 issue of The Baylorian is available, and it does contain a lot of poetry, but none of it is from the poetry contest. So, it seems that at some point it was decided to publish the poems in The United Statements, instead. News of the contest winners started appearing in state newspapers as early as May 9, 1923. Presumably, “The Sea” must have appeared in The United Statements around then. There are two 1923 issues available at the website, but neither the March 31st nor the May 19th edition has a poem by Robert E. Howard.

And the search continues. 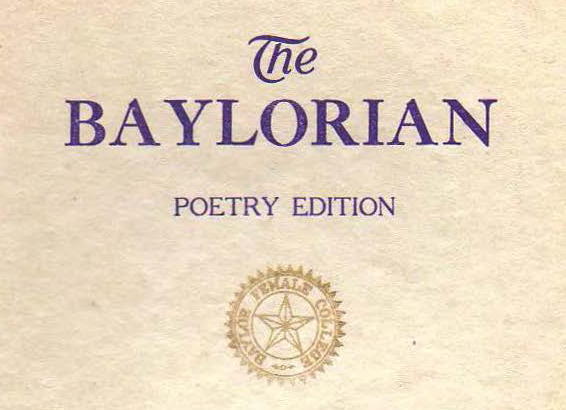