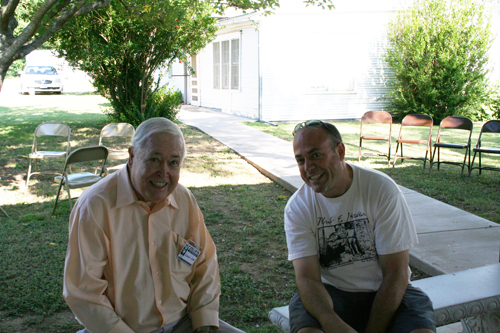 Robert E. Howard died in June of 1936, but his work lived on. He may have lived long enough to see “Black Canaan” in the June issue of Weird Tales replaced by “Red Nails” in the July issue if, as in current practice, magazines appeared a month in advance of their cover date. The fact that Howard was dead and gone in no way slowed his publication; he had stories in Argosy, Action Stories, Weird Tales, and others throughout the rest of 1936. Action Stories’ January ’37 issue contained a Howard yarn; Golden Fleece published “Black Vulmea’s Vengeance” in their November ’38 issue and “Gates of Empire” in the January ’39 number; Weird Tales continued a fairly steady stream of Howard’s poetry and prose until August of 1939. And then things went quiet—for a while.

The very early 1940s saw little Robert E. Howard. Fight Stories continued the practice they’d begun in 1937 of reprinting Howard’s stories once or twice a year using the “Mark Adam” byline; their last reprint appeared in the Fall 1942 issue. Spicy Adventure Stories reprinted three of Howard’s yarns, also in 1942, but again, his name was absent. From late ’39 all the way through 1943, none of Howard’s fantasy or horror tales appeared in any mainstream publication; it seemed that Robert E. Howard had finally gone west. But then “Texas John Alden” appeared in Masked Rider Magazine for May of ’44, and August Derleth included “The Black Stone” in the anthology Sleep No More. In 1945, Crawford Publications brought out their eponymous The Garden of Fear booklet. Things were looking up.

In 1946, Arkham House got the ball rolling. Skull-Face and Others, despite reportedly sluggish sales, got Howard back on the radar. Throughout the late ’40s and into the early ’50s, Howard’s work appeared in the top fantasy magazines of the day: Avon Fantasy Reader, Famous Fantastic Mysteries, Fantasy Fiction Magazine. The early ’50s saw several of Howard’s westerns also reprinted. Meanwhile, the folks over at Gnome Press were busy making sure that Howard’s most famous creation wouldn’t be trapped in the pages of crumbling pulp magazines; Conan the Conqueror, the first of seven Conan volumes, appeared in 1950, with new volumes appearing fairly often until 1957. That same year Glenn Lord made his first big splash in Howard publishing by issuing Always Comes Evening, the first major collection of Howard’s verse. But then things slowed down again.

The late ’50s saw very little Howard publishing. The well-known fan endeavor, Amra, began, but had next to nothing to do with any of Howard’s works besides Conan. Donald Wollheim included “The Cairn on the Headland” in his The Macabre Reader. And then—nothing.

After compiling Always Comes Evening, Lord began his search for other obscure Howard items. In a recent letter, Mr. Lord told me, “I began buying large runs of Action Stories and Fight Stories as I knew they ran a lot of Howard’s work. Fortunately, at the time, pulps were cheap — I paid $1 each for them from Midtown Magazine Service in New York City.” He also got in touch with Lenore Preece, who sent him copies of The Junto and Howard’s letters to her brother, Harold. George Haas provided copies of letters to Clark Ashton Smith. And, through a series of contacts beginning with E. Hoffmann Price, Lord was able to track down the legendary “Trunk” of Howard’s unsold manuscripts and other assorted items.

The items slowly trickled in and Lord began work on a preliminary bibliography. As that work progressed, he told me, “I began thinking of putting this data and material in a fanzine. I named it The Howard Collector after Ray Zorn’s The Lovecraft Collector.” And thus, in the summer of 1961, smack dab in the middle of a severe Howard drought, appeared The Howard Collector #1. In his “Editorial Notes” for that issue, Lord states that THC “is dedicated to the memory of Robert E. Howard and will contain material by and about him. Frequency of publication, or continuation, will depend upon reader response.” No worries there.

That first issue provided a model that has been followed by nearly every Howard fan publication since: a little biography, “Facts of Biography” and “Letter: Dr. I. M. Howard to Frank Torbett”; a little commentary, E.H. Price’s “Robert Ervin Howard”; a little bibliography, “Verse Index”; some Howard fiction and verse, “Midnight,” “With a Set of Rattlesnake Rattles,” “The Sands of Time,” and “Sonora to Del Rio.” And Lord was just getting started. He published a total of 18 issues of THC, from that groundbreaking first issue in the summer of 1961 to the final edition, a 52-page extravaganza, in the autumn of 1973.

Anyone who has ventured into the publishing arena has some stories to tell; it’s not as easy as some might think. Lord started having problems fairly early on: “Alvin Fick printed the first issue; he did nice printing but could not continue to print for me,” said Lord. And he needed a printer; of the 150 copies of THC #1 that were prepared, most had sold. When THC #2 appeared, in the spring of ’62, Lord’s “Editorial Notes” stated, “Response to the first issue of The Howard Collector has been favorable. A few copies still remain for those interested.” Luckily, Donald Grant stepped in, but he would not be the last printer, as Lord reveals:

Donald Grant printed several issues, until he finally got so busy that he could no longer do so. With THC #9, I found out that 150 copies were no longer enough, so I reprinted that one and upped the print run to 300 copies. After Grant quit printing THC, I managed to borrow an IBM Executive typewriter, with a Bold Face No. 2 typeface — the same one used by Grant at the time — from a secretary at my workplace, and typed out the next two or three issues, sending the prepared Text to a print shop in Missouri that I was told about. And then I managed to purchase a reconditioned IBM typewriter, same typeface, of my own and I used that for the remainder of the issues.

While advanced in its day, the IBM typewriter was worlds away from modern desktop publishing:

The IBM Executive spaced the letters so that you could justify the right margins. You had to do a first typing, then add or delete spaces in the second typing, so that it all came out at the right evenly. And certain letters took up more space — an “i” for instance was one space, an “a” was two, a “w” was three, if I recall correctly.

Despite the printing problems, Lord managed to present to salivating Howard-heads everywhere some truly unique and original material, coupled with extremely rare (at the time) items that had appeared in publications as diverse as they were limited: The Tattler, The Poet’s Scroll, The Yellow Jacket, and so on. In 1979 Lord collected the best of the material from his Journal and sent it off to Ace Publications, where it saw print in the volume aptly entitled The Howard Collector. This is still the best place to find the nuggets of Howardia that were published within those fragile pages. Other publishers have reprinted many of the items included in the journal, but some still remain locked in its pages, especially the non-Howard items, like a letter from Chandler Whipple to Glenn Lord, reviews by Fritz Leiber and Fred Blosser, poetry by Tevis Clyde Smith, Manly Wellman, de Camp, and others, articles by E.H. Price, Lin Carter, and so on.

With Amra doing its thing in the Conan world, The Howard Collector was an important voice for Robert E. Howard during this time—Amra even helped, as Lord recalls: “I got notices in Amra and ran ads in Bibby’s Fantasy Collector, possibly one or two others, for subscribers but quite a few probably found out by word of mouth from other subscribers.”

And what a list of subscribers it was. The first fans were lucky enough to be in contact with people who had actually known Howard, as well as some of the pioneers in the field. Lord remembers a few of those important readers: “Larry McMurtry subscribed, at the time he was running a used book store in Houston. The Preeces were also subscribers—Louise Preece, Lenore Preece, Harold Preece, Kathering (Preece) Luparello. Clyde Smith bought five copies of each issue.”

During his time publishing THC, Lord acquired “The Trunk” and became agent for Howard’s literary rights. Business was soon booming, fed in part by the growing popularity of the Lancer Conan volumes, which began their historic rise in 1966. As Lord reports in the final THC, “This will be the final issue of this magazine. This is its twelfth year of publication and while I dislike having to terminate it, there are a number of factors that dictate that policy, not the least of which is lack of time.” Lord explained further in a recent letter: “I cut it off when my agenting business got so busy that I had little free time—I was still working at my regular job also.”

So, at the dawn of the Howard Boom, The Howard Collector closed up shop. But it had done its job; it had kept the name of Robert E. Howard alive and well when Conan had threatened to eclipse him. For a complete listing of all items that appeared within the pages of that first Howard ‘zine, have a look here. I’ll let Glenn Lord sign off: “And I guess that is all for THC. It did run to more issues than I anticipated, after all.”