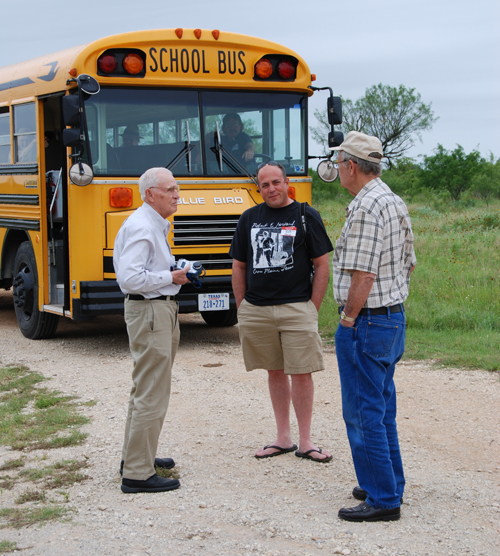 The fans who participated in the bus tour at Howard Days 2007 received a special treat. Not only did they get to hear some great stories by the tour guide, long-time Cross Plains resident Don Clark, they also heard some great color-commentary by Alton McCowen (above at right) and Norris Chambers (at left), a man who actually knew the Howards. Those of us who were seated near the front of the bus even got to eavesdrop while these three chatted between tour stops. The trio seemed to know everything about the local area and quickly assimilated each other’s knowledge. One would say, “Did you know so-and-so?” and all the relevant details would follow from one of the others. “Didn’t so-and-so live there?” and so on.

As we passed the little-used dirt roads in the Cross Cut vicinity, Mr. Chambers said, “Boy, I went down that lane a lot.” And another conversation ensued. I tried my best to stay out of their chat, but couldn’t resist a few questions. Alton McCowen told me that he knew someone who had helped build the road from Cross Plains to Brownwood, and that he’d been paid .56 cents an hour for his work. Mr. Chambers piped in, “They built this big road after the war. It wasn’t paved then, and was awful muddy.”

At the bridge into Burkett, the bus stopped. Under the bridge is the Pecan Bayou—covered with shrubs and trees, all green from the heavy spring rains. Don Clark told us all that there used to be carnivals and dances in the Bayou. “After the fair stopped coming,” he said, “there was a lot of parkin’ and sparkin’ down there.”

At one of the stops—a no-foolin’ Texas ranch, complete with Longhorns—I cornered Misters Chambers and McCowen for a longer conversation, while the rest of the crowd went to get a close-up look at the steers. Mr. Chambers told me that Doc Howard wasn’t the best driver around: “Once we were driving to Brownwood and he’s got the car stuck in 2nd gear. I told him, ‘You might want to put it in high.’” He also told me about taking Robert’s Chevy “down to get the bullet hole fixed” after the suicide, and that Doc Howard used that car for a good while after.

Mr. McCowen answered my questions about Cross Plains, telling me where the movie theater was located (“Next to the tax office by the library”) and that there was no radio station in town; the closest was in Brownwood.

While not the best of drivers, Mr. Chambers had no doubts about Doc Howard’s medical skills. He told me about a minor car accident that he was involved in, saying that one of the girls passed out. He took her straight to Doc Howard to get “patched up.”

About this time, Mr. Chambers’ wife ambled up and listened as her husband said, “When we were first married, we lived with my folks in Cross Cut. Doc Howard would come by sometimes.”

This brought a chuckle from his wife who said that Doc Howard was always hungry. When he came calling, “We had to start the fire in the old stove and cook things—from scratch!” When she didn’t feel like cooking, she told me, she’d just whip up some scrambled eggs.

We started to discuss Dark Valley Destiny as the rest of the crowd returned. Mr. Chambers remembered talking with de Camp and that “He said he would give us a copy, but he never did. We had to buy one.” And then the tour was back on the road and I had to content myself with eavesdropping once again.