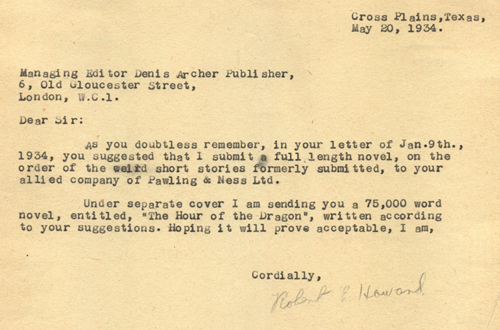 So I’m going through The Last Celt the other day, looking through the letters section in the back, and I see the letter to “Managing Editor Denis Archer Publisher” dated May 20, 1934. This letter briefly explains the genesis of Howard’s one and only Conan novel, and ends by stating “Under separate cover I am sending you a 75,000 word novel, entitled ‘The Hour of the Dragon’ . . .” Fine, I think, Howard sends the letter to the publisher in advance, and later, when he gets around to it, packages and sends the typescript. This gets me thinking, though, and I pull out a copy of Glenn Lord’s Ultima Thule to read the rest of the letters in this series.

On June 15, 1933, Howard sent a letter to Hugh G. Schonfield at the Denis Archer publishing house, enquiring about a collection of his short stories. On January 9, 1934, he got the famous response about there being a “prejudice that is very strong . . . against collections of short stories” in England at the time and a recommendation that he “produce a full-length novel of about 70000-75000 words.” Apparently Howard took that advice; he was ready to send The Hour of the Dragon off to England in late May of that year. We all know that Denis Archer never published the story, however, but that it appeared in Weird Tales, instead.

But I’m getting off my subject. A couple of years ago I found a copy of the May 20 letter on the internet, I forget where; I think it was the Necronomicon Press website. Wherever it was, they had a nice scan of the letter on their page, and I downloaded and saved it. More recently, Glenn Lord sent me a few photocopies of letters when I was preparing to reprint Ultima Thule. Just for kicks, I pulled out the photocopies and leafed through them. When I came across the letter to Denis Archer, something wasn’t right: it was dated May 22. 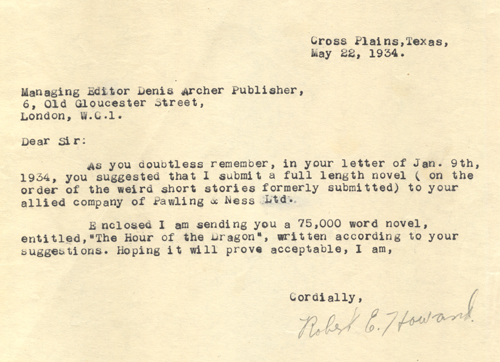 That can’t be right, I thought. So I pulled out Ultima Thule and checked the letter: May 20. That’s right, sports fans, Howard wrote two letters to the publisher, but don’t get too excited. Besides the different dates, the only difference in the letters is the beginning of the second paragraph. The May 20 letter starts “Under separate cover I am sending,” and the May 22 letter starts “Enclosed I am sending.” No big deal, I guess.

But I wish I knew how these two letters came about. Did Howard send the one on the 20th and include the other with the typescript on the 22nd? Did he change his mind and decide to send both the letter and the story in the same package instead of separately? Maybe he was just too lazy to go to the post office on the 20th? Who knows?